**UPDATE 09/28** Speedway 660 and DMR Auto have announced the Ricky Bobby Street Stock 150 will go ahead on Saturday, October 16th. Racing will begin at 2pm. More information to come as the event draws closer.

**UPDATE 09/25** Due to the forecast of persistent rain throughout the weekend, the Ricky Bobby 150 has been postponed. Once a date is confirmed, it will be announced via the track’s website and social media channels.

(GEARY, NB – September 23rd, 2021) – The Speedway 660 season will draw to a close this weekend – but the track has saved one of the best events for last! DMR Auto presents the Ricky Bobby 150 on Saturday, September 25th at 4pm. The Street Stock 150, featuring a purse of approximately $15,000, will be the highlight of the afternoon. The Late Model Sportsman and Fredericton Gun Shop Sharp Shooters will play support in their championship races. Qualifying begins at 4pm on Saturday at the Geary, New Brunswick oval.

The DMR Auto Street Stock division has been one of the most competitive at Speedway 660 between all house divisions in 2021. Of seven races, only two drivers have won multiple features at the track and leading the charge is the Maritime Street Stock Series point leader and SpeedWeekend winner Michael Cormier (Grand-Barachois, NB). Cormier has already won two extended distance races in 2021 in the Urquhart Construction 100 and the D. Gillespie and Sons 100 and is the reigning champion of the DMR Auto presents the Ricky Bobby 150. His Speedway 660 accomplishments are in addition to the accolades earned throughout the Province since the green flag flew on the season back in May. If a driver wants to win the Ricky Bobby 150 on Saturday, they will have to beat the No. 68 Moncton Chrysler Dodge entry.

Cormier was challenged in the most recent DMR Auto Street Stock race at Speedway 660 by Luc McLaughlin (Geary, NB), who was driving the Bill Storey No. 53F entry. In fact, the two swapped a bit of paint during the event before McLaughlin’s race ended shy of the finish on SpeedWeekend. McLaughlin is a former Ricky Bobby 150 and track champion. Should he and Cormier find themselves near the front, fans should expect an encore of the colossal confrontation they saw on Labour Day Weekend. McLaughlin will once again be piloting the No. 53F car on Saturday evening.

When he checks in to technical inspection on Saturday, Riley Goodwin (McAdam, NB) will become the 2021 DMR Auto Street Stock champion at Speedway 660. This race is a “show point” event, meaning every driver that shows receives the same amount of points regardless of finish. Goodwin leads the Street Stock point standings over Tristin Harris (Harvey, NB) and Caleb Urquhart (Harvey, NB). With the point battle decided, you best believe this trio will be going hard to capture the win in the biggest Street Stock race of the season at Speedway 660.

As of press time, four drivers are making the trek from Prince Edward Island to compete in the DMR Auto presents the Ricky Bobby 150. Mitchell Arsenault (Summerside, PE), Jeff Macinnis (Summerside, PE), Randy Millar (Tyne Valley, PE) and Matthew Ford (Summerside, PE) are all planning to cross the Confederation Bridge on Saturday to race for the victory. Arsenault competed in this event in 2020 while the remaining three will make their first Street Stock starts at Speedway 660 on Saturday.

Millar, who acquired the car that Nick Cudmore (Petitcodiac, NB) drove to the win in the Season Opener, got the itch to race following a trip to SpeedWeekend in September as a spectator. Macinnis is a multi-time winner in the Street Stock class at Oyster Bed Speedway in 2021 while Ford’s last appearance in the Geary woods was 2020 during SpeedWeekend in a Honda Mini Stock.

Shawn Hyslop (St. Stephen, NB) has quietly put together a great resume in a part-time 2021 season at 660. Hyslop has two victories and a runner-up finish in five starts this summer and will look to cap the season off with a third victory. He is sure to be challenged by the likes of fellow local favorites like Justin Cole (Harvey, NB, Robert Raynes (Saint John, NB) and Kyle MacKinnon (Lincoln, NB). Several local stars have not registered for the event as of press time but are expected to roll through the gates Saturday afternoon in Geary.

The “Never Give Up” Award returns in 2021 for the DMR Auto Presents the Ricky Bobby 150. One driver who keeps digging and does not give up over 150-laps on Saturday will receive a $2,019 payday in Memory of Chris Hanley, the 2019 DMR Auto Street Stock champion at Speedway 660. While he will be gunning for the win in 2021, Brad MacLean (Black River, NB), the 2020 recipient of the award, will be in the field on Saturday evening. Several contingency awards, along with a full lap board, are up for grabs on Saturday that will push the total purse to approximately $15,000 – making it one of the richest Street Stock races in Atlantic Canada.

The Ricky Bobby 150 presented by DMR Auto is run in honor of Rick Arbeau, known around Speedway 660 as Ricky Bobby. Arbeau was diagnosed with stage four small cell cancer and fought hard every day until his passing in 2019 prior to the start of the racing season. Arbeau was a fixture at the race track since its opening in 1994 and is dearly missed by all at Speedway 660.

BJ Gillespie (Harvey, NB) has a 25 point cushion in the Fredericton Gun Shop Sharp Shooter championship chase heading into the Season Finale. Darren Wilcox (Fredericton, NB) is his closest competitor in championship points and in turn has a 20 point advantage on Randy Titus (French Lake, NB) with one event go to. Everyone has something to race for throughout the top ten in the standings and with car counts averaging over 24 a race, nothing will be decided until after the checkered flag flies. The last two events for the division, the Gunslinger 50 and SpeedWeekend Kick Off, have been won by Matt Martin (Geary, NB). 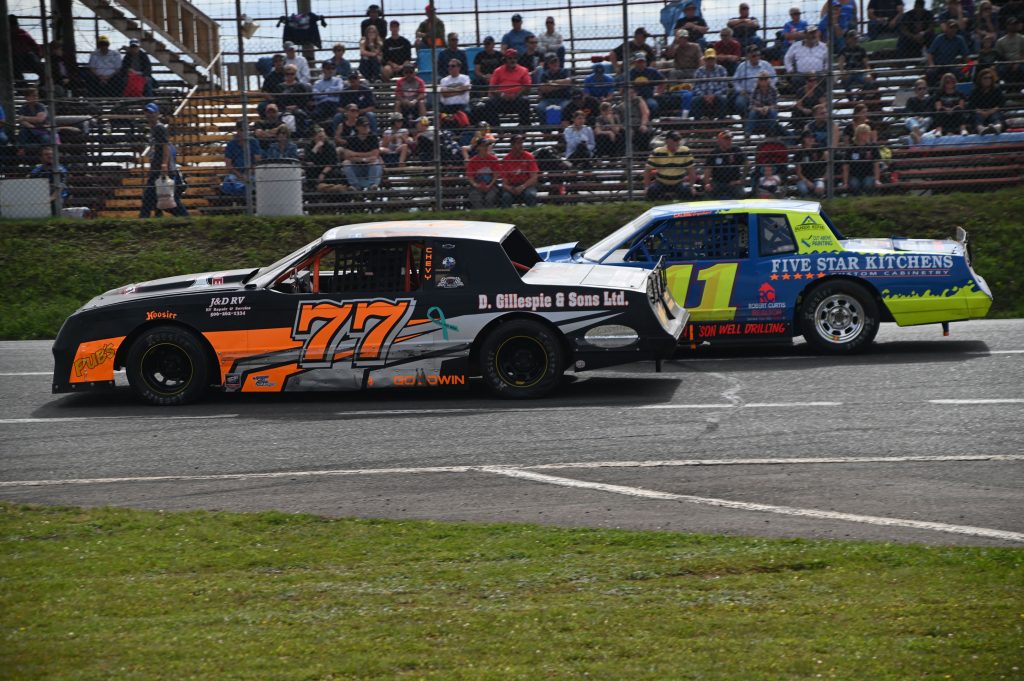 For the fifth straight season, children aged 15 and under will be admitted to the grandstands for free to every stock car event at Speedway 660. The admission structure makes it easier for families to attend race events at the track and received positive feedback from fans when implemented mid-season in 2017.

Adult grandstand admission price for Saturday’s Ricky Bobby Street Stock 150 presented by DMR Auto is $20 (aged 16 and up). Pit admission is $25 and is restricted to those 16 years of age and older. Tickets are available at the gate on race day. Pit gates for competitors will open at 10:30am on Saturday, grandstand gates open for spectators at 3pm with racing getting underway at 4pm. A complete race day format is available via the track’s Facebook page, www.facebook.com/Speedway660. Should inclement weather interfere, a rain date of Sunday, September 26th at 2pm has been set aside.

About Speedway 660:
Speedway 660 is one of Canada’s premier stock car racing facilities. Located in New Brunswick’s Fredericton region, it has attracted race teams and fans from the Maritimes, New England and Quebec since 1994. The Speedway 660 racing season runs from mid May until late September. SpeedWeekend, one of the most prestigious short track events in eastern North America, is the marquee event of the Speedway 660 season on Labour Day Weekend.

RICKY BOBBY 150 POSTPONED TO OCTOBER DUE TO RAIN

We use cookies on our website to give you the most relevant experience by remembering your preferences and repeat visits. By clicking “Accept All”, you consent to the use of ALL the cookies. However, you may visit "Cookie Settings" to provide a controlled consent.
Cookie SettingsAccept All
Manage consent

This website uses cookies to improve your experience while you navigate through the website. Out of these, the cookies that are categorized as necessary are stored on your browser as they are essential for the working of basic functionalities of the website. We also use third-party cookies that help us analyze and understand how you use this website. These cookies will be stored in your browser only with your consent. You also have the option to opt-out of these cookies. But opting out of some of these cookies may affect your browsing experience.
Necessary Always Enabled
Necessary cookies are absolutely essential for the website to function properly. These cookies ensure basic functionalities and security features of the website, anonymously.
Functional
Functional cookies help to perform certain functionalities like sharing the content of the website on social media platforms, collect feedbacks, and other third-party features.
Performance
Performance cookies are used to understand and analyze the key performance indexes of the website which helps in delivering a better user experience for the visitors.
Analytics
Analytical cookies are used to understand how visitors interact with the website. These cookies help provide information on metrics the number of visitors, bounce rate, traffic source, etc.
Advertisement
Advertisement cookies are used to provide visitors with relevant ads and marketing campaigns. These cookies track visitors across websites and collect information to provide customized ads.
Others
Other uncategorized cookies are those that are being analyzed and have not been classified into a category as yet.
SAVE & ACCEPT